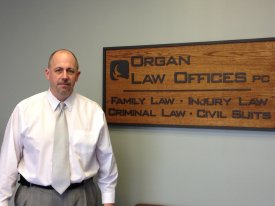 Jim Organ was born and raised in the Wabash Valley. Jim graduated from Indiana University – Bloomington with a Bachelor of Science degree in Political Science and a minor in History, and from the Brandeis Law School at the University of Louisville with a Juris Doctor. While in law school Jim was a Member of the Journal of Law and Education. After graduation from law school, Jim returned to the Wabash Valley area, and was admitted to practice law in the State of Indiana and Federal District Courts in 1992.

Jim developed his private practice interest in Criminal Defense, Divorce and Family Law cases and views his role as an advocate to fight for what is fair.

Jim has continued to work as a private Criminal Defense and Family Law Attorney and has successfully represented people facing all types of criminal allegations, as well as family situations.

Jim has always strongly believed that legal services should be provided for those who simply cannot hire experienced and qualified counsel to stand with them. So beginning in 1997, Jim started serving as Appointed Defense Counsel in Parke County, Indiana. Jim has remained motivated to serve the public in this capacity, and he is a Deputy Public Defender in Vigo County, Indiana, where he defends clients facing serious felony cases in the Vigo Superior Court Division Three.

Jim Organ views his role as a defender of his clients’ freedom, and also as a defender of the Constitution. With that in mind Jim has handled all types of criminal cases as Defense Counsel, and he has handled his share of the more high profile cases in the Wabash Valley over the years.

Being a trial lawyer Jim does not confine his practice to one area of law. Organ Law Offices, P.C. also serves as counsel in all kinds of civil claims and actions, and Jim regularly represents businesses in civil claims throughout the Wabash Valley. Jim has also handled cases at the appellate level and has argued before the Indiana Court of Appeals, as well as handled cases regarding personal injury.

Jim has been a lecturer and author for Indiana Continuing Legal Education Forum. He has been a Guest Instructor in Trial Advocacy at the Indiana University School of Law. Jim has served on the Parke County Drug Court Team, helping Parke County to establish their own Drug Court.

Jim also has been peer reviewed by Martindale-Hubbell earning their CV rating.

Jim and his wife Norma have three children, and three grandchildren. Jim has also been involved in a variety of community activities, including events such as Relay for Life and volunteers as a junior high youth basketball coach for the Southwest Parke School Corporation.